Thank you for your patience while we retrieve your images.

Rainbow Village
Story: It was created by former soldier, Huang Yung-Fu, who was born in 1924. He began painting houses in his settlement, now known as Rainbow village, to save them from demolition. Over the years his colorful artwork, which includes birds, animals and people, has spread over the remaining houses in the village, which once contained 1,200 homes.
Taken from an article: Huang has lived there for 37 years, staying even after his neighbors abandoned their homes and only 11 houses remained.
That's when he decided to paint. "I was the only person left in the village and I was bored," he said.
"My father taught me how to paint when I was five years old, but I hadn't done it since I was a child.
"The first thing I painted was a bird inside my house."
We were told that at 93 years old he continues to paint every morning for 3-4 hours. 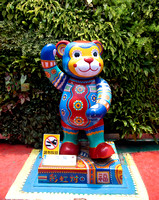